How free games are designed to make money ?

How free games are designed to make money ?

During the recent times, we’ve been getting quite a lot of questions about the How free games are designed to make money and what is the hottest topic on the app market? Well, it’s time to reveal the truth behind app monetization magic. As free applications definitely outmaneuver the paid ones (considering download numbers), the main thing here is to find out how to capitalize on those new users. With no further question, let’s unveil the main advantages of creating free apps and the most efficient app monetization strategies.

How free games are designed to make money ?
The answers is Freemium Strategy.

Freemium apps are one of the most popular forms of How free games are designed to make money. These are available for free n the app stores, but include optional features or items for sale. By offering a solution that is initially free of charge, app publishers can attract a wider user base at a faster rate, since many users can be reluctant about paying upfront before download. Users then have a chance to try the app before committing to a purchase. Extra features are optional and available to those who wish to acquire them using an in-app purchase function. Check out our many unity 3d games have this in-app purchase function to earn money 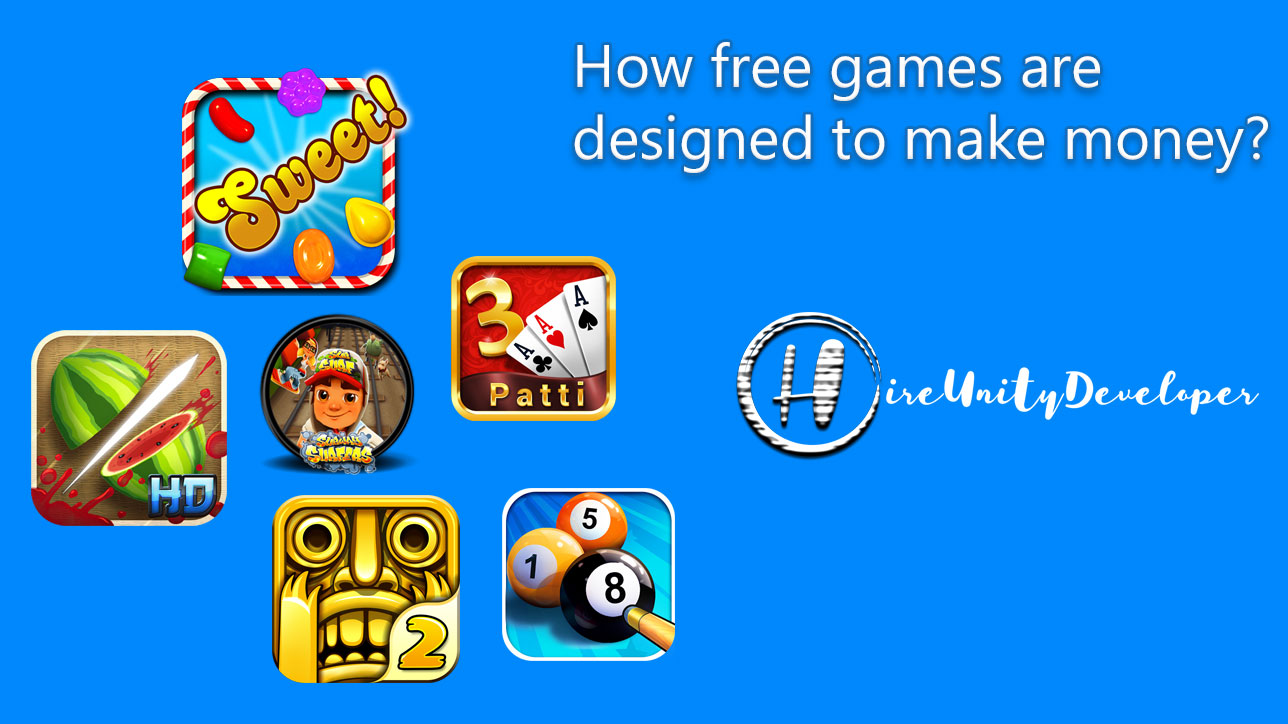 In-app purchases are made directly from within the app and are usually a very simple process. IAPs are typically used to access special contents or features such as boosts and power-ups, restricted levels, virtual money, extra characters, etc. Most of the revenue goes directly to the publisher’s developer account.

Mobile advertising remains the most profitable app revenue model. 7 out of 10 app providers used it in 2018, 18% plan to use it in the near future. Using ads to monetize app is quite simple, all required is to display commercial inside your mobile apps and get paid from the ad networks.

– are the full-screen pop-ups, displayed at specific time frames. The add can be closed by opening the promoted page or by a close button in the ad corner. This method to boost app revenue is efficient at natural transition breaks mostly for messaging and content apps, news, and for games, before or after an expected content or functionality (eg. game levels) and can be used to maximize impressions.

usually appeared in different sizes and stretch at the top or bottom part of the screen. They are small and less obtrusive so users can freely interact with the app. Besides, app developers can target tailored users based on demographics and past behaviors. Still, they have low engagement rates of about 0.1% CTR.

are displayed automatically, or used as a ‘rewarded video’ – opened on-demand in exchange for any in-app reward. For instance, the user can get app currency, extra lives in games or additional features for watching video add. This is a win-win strategy both for app providers and customers.

Native Ads are created to fit seamlessly the main concept design and appear within the app as its natural element. Mostly, it manifests as sponsored content or video, aimed to promote a product. As native advertising are considered by users to be as less irritating and intrusive, they get more popular revenue stream for app providers.

The primary way for How free games are designed to make money to unlock more content is to advance further into the game either by unlocking new items that open up content or via gaining experience. This can be achieved through standard gameplay but if a player is willing to pay some money, they can unlock a method to advance faster in the game.

One of the ways that developers make money on players in their How free games are designed to make money is the purchase of items. This may give a slight edge to the player over the default player items or it may just be a cosmetic change. It depends on the game and how it is played.

Cosmetic items are generally those that give the player and their avatar a different appearance than other players in the game.

In games like Candy Crush and even Angry Birds Go!, there is a set number of times that a player can attempt a level or play a specific character. When they reach the limit, they are forced to wait for a period of time before they can play again. Players can avoid this waiting period if they are willing to spend money to remove it.

There are a number of games out there where you can have a number of different either monsters, characters, cards, etc when you play the game. Now there are far more of these items than the slots given to the player in the game. This will restrict the player’s ability to play the game as they don’t have access to as diverse a range of the items that go in those slots. Thankfully, the developers are more than willing to offer up additional slots for you to collect more of the things within the game. So now at the end you know How free games are designed to make money right?

So In this article, you will get all idea about the How free games are designed to make money. Make your own game and start earning with it.